Clear Prep+Finish™ is a conditioning sealer for leather and vinyl. It is optional for most colors and adds shine.*

Mix any Color with Clear to make a more transparent glaze and use for:

Use alone for a glossy finish (discouraged on vinyl). Do not use if you desire a matte finish.

How much do I need?

All Colors and Clear Prep+Finish™ cover the same square footage. These estimates can vary based upon quality and condition of material:

Other factors to consider:

If you need an exact color, try our Color Matching Services! 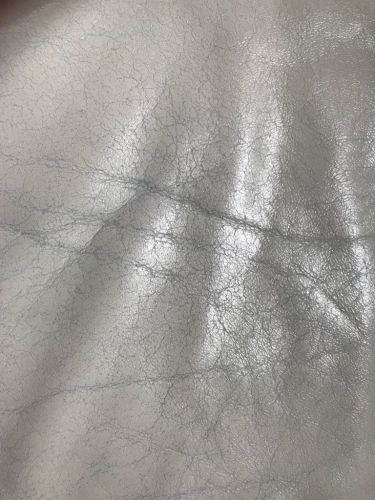 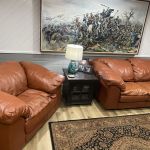 Took some elbow grease to clean with alcohol to get oil and years off. Easy to use prep. Three easy to apply coats (probably could have gotten by with 2 coats) and then the finish coat. Took 2 days for large curved sectional, because of drying and only working it during the day.

Afterward I used the clear on a very high quality but neglected leather couch, cushions, and pillows, all really old, dry, dirty, and well used. After a quick cleaning of the surface (409), six coats of clear with an hour dry time between coats, and you'd swear these pieces were just delivered from the King Ranch saddlery and leather works. Maybe saved $5,000 replacement of those beauties.

And then there were the barn boots, ugly but in good condition... like new now with mahogany color and two clear coats.

It had to be yet another too-good-to-be-true product, but I was intrigued. It wasn't expensive, and seemed not to require any equipment, so I took a chance and ordered some. I figured it wouldn't really work, or would quickly peel or something like that, but I was going to throw the couch away anyway, so what the heck.

I was - and am - amazed. Our couch literally looks brand new. What had been a sad, parched, sun-bleached couch is now completely restored - beautiful, supple, sumptuous. And the great thing is it worked exactly as advertised (how often does that happen?). It takes technique, which you learn quickly, but not the kind of skill (such as with spray guns and dyes) that takes much longer to acquire - and yet it still looks like it's been professionally restored.

I don't have any before photos, but the $115.00 w...More
I don't know how you did it, but you truly have a product that worked far beyond my expectations.

I don't have any before photos, but the $115.00 we spent on two bottles of dye and one bottle of clear coat has successfully restored two couches, that I believe are valued at over $2000.00!

These couches had ink, wine, and dog urine stains that we thought had rendered the furniture unsavable. They were faded, cracked, dry and ugly. Frankly, my wife and I were embarrassed to have guests see them.

After six coats of cognac, and one coat of clear coat, they look like new! We have dye and clear coat left over for future patchwork because of the dogs and sun damage from the window.

I will recommend Rub N Restore to anyone who desires to resurrect their leather furniture.

I won't repeat the snickering comments from my co-workers when I brought the couch into my workplace, but let's just say that it looked even WORSE in our flourescent lighting, and my office is a place of no-holds-barred teasing when warranted...and they let loose on me (and my poor little couch) with a vengence!

I had some idea that I could stain it if it wouldn't come clean (which, of course it wouldn't, even after serious scrubbing) but wasn't sure what to use. A search on the internet brought me to your youtube video, and thence to your website where with hope in my heart I purchased the Espresso color and the Clear Prep - Finish.

Application was a breeze, goof-proof to say the least! We have two dogs in our office and even without the topcoat they barely made a scratch in the color after 6 coats (and when they did I just touched it up). It is a beautiful couch now and I can't tell you how pleased I am that it has been "Rubbed and Restored".

A picture is worth a thousand words, you can see the results with & without the top coat. It is FABULOUS! Everyone in my office is eating their words and asking about your product. They are all just AMAZED at the transformation and I will be singing your praises for all time!

Buy thier product's they work!!!!