The reasons to support small business and boycott Amazon are ever-increasing. Amazon’s once innovative model is now a bastion of consumerism, waste, and abusive practices. Amazon’s network of contracted delivery companies have a terrible safety record marked with routine fatalities. Amazon has been widely criticized for its poor treatment of employees and contractors. Amazon’s Ring is building a privatized surveillance network at the expense of consumers’ privacy. Its ads and media infringe on competitors’ trademarks and intellectual property. The list goes on and on and smacks of monopoly. When Amazon CEO Jeff Bezos predicts that Amazon will fail within 30 years, does he intend to take our economy’s health with it?

Stories of delivery contractors pressuring their drivers to move quickly, take more dangerous turns, and even pee in bottles to avoid bathroom breaks in order to satisfy Amazon’s strict timetables are rife. Even Amazon’s first CFO, Joy Covey, was killed by a contracted delivery van. And yet, Amazon officials have continued to sacrifice safety for speed in company protocol, because it’s more important that customers be delighted by fast delivery.

On Black Friday 2019 workers from six German distribution centers staged a walkout over pay and conditions. Meanwhile, protesters gathered outside Amazon’s French headquarters in Clichy and tried to blockade a shopping center in Paris and a logistics center near Lyon. The protests, dubbed Block Friday, denounced “the model of consumption that is anti-ecological and anti-social.” Black Friday was exclusively an American custom until the last decade when Amazon encouraged the observance in the UK. Europeans are resisting the trend, and language banning Black Friday advertising has even been introduced into France’s anti-waste legislation.

Despite its pledge to be net carbon netural by 2040, Amazon has threatened to fire employees who speak of environmental issues. Amazon’s ubiquity and impact is most visible in a place like Baltimore. At BWI Airport Amazon boasts a $36 million, 200,000-square-foot building with bays for 93 tractor-trailers to load and unload at once. Its  27-acre BWI2 warehouse has over 14 miles of conveyer belt, built with substantial government subsidies. Yet Amazon pays its pilots a third less than FedEx or UPS. Warehouse workers earn less than their GM and Bethlehem Steel unionized predecessors, endure long shifts, and are auto-dismissed by computers if they do not maintain a breakneck pace for the entire workshift.

While Amazon is still the second-largest retailer in the United States behind Walmart, its greatest profit now comes, not from online orders, but from cloud computing and advertising. “Amazon sees local government as a big purchaser of those [cloud] services, and sees law enforcement as an easy way in to gain those bigger contracts from local government.”

More than half of American households have an Amazon Prime membership (including this author, but not for long), and most shopping searches begin on Amazon, not Google. Amazon’s bread and butter now comes from selling ads based on consumer shopping habits — with profits in the billions. 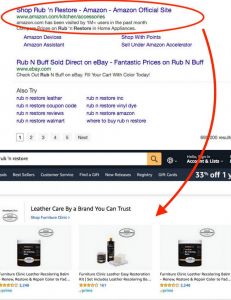 Among these shopping habits, Amazon’s algorithms noticed many users have been searching for “rub n restore” for their leather furniture. Since at least June 2017 Amazon has been illegally using Rub ‘n Restore’s trademarked brand name in Google, Yahoo and Bing ads. Clicking on the ad diverts shoppers to products sold, not by Rub ‘n Restore, but rather its largest competitor, Furniture Clinic, via Amazon.com. Such brand identity has been hard-earned by CC and Lesandre, the mother-and-daughter owners and operators of Rub ‘n Restore, Inc, through their unique products, compelling how-to videos, and outstanding one-on-one customer support.

Despite murmurs of anti-trust legislation, the e-commerce giant lobbied for the “Amazon Amendment” to win government sales and signed a lucrative deal with with 1,500 public agencies in 2017. 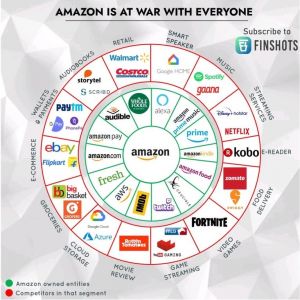 Amazon employees have used data from independent sellers on the company’s platform — their own customers — to develop competing products, which often crush the smaller companies in the process.

Amazon continues to acquire other businesses, among them Whole Foods, Zappos, AbeBooks, Diapers.com and Fabric.com.

Can anyone say monopoly?

If these aren’t reasons enough to boycott Amazon, CEO Jeff Bezos himself admits, “Amazon is not too big to fail. In fact, I predict one day Amazon will go bankrupt.” Amazon employs over 600,000 people and saw a twenty-fold increase in the last eight years. Amazon’s stock price has more than quadrupled since 2013. Pair that with little sellers who concede to ‘join or die’ the online giant, Amazon’s inevitable decline could eviscerate places like Baltimore and constitute the next big crash. And yet Bezos “is on track to become the world’s first trillionaire by 2026.” In July 2020 his fortune increased by $13 billion in a single day.

“The most resilient economies are multi-faceted and home to a diverse number of industries.” Such economies avoid large drops in economic growth and employment and are more likely to experience a faster recovery in a recession or natural disaster. They are too diverse to fail.

Thus it is in our own best interest to support small business at every possible turn, even if it means sacrificing a few extra bucks, a little convenience or an extra day of shipping. Check out this fantastic compendium of competitively priced ethical alternatives to Amazon products and digital services.